Is a Chilled Beam System Right for Your Space? 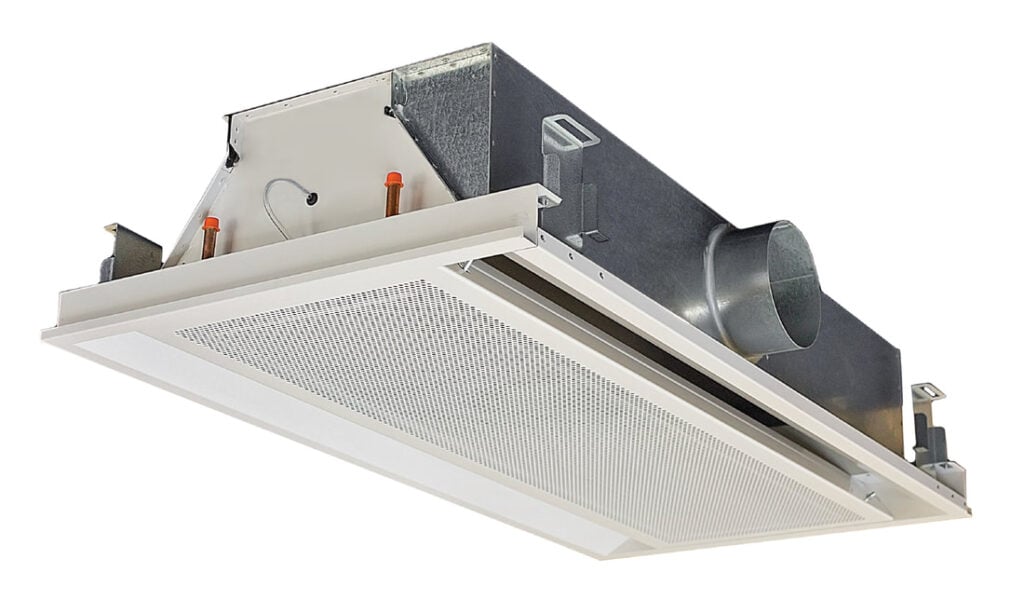 Radiant heat has been warming homes and buildings for hundreds—if not thousands—of years. Its cooling counterpart, the chilled beam system, has been around since 1986. Given those numbers, it’s no surprise that chilled beam cooling isn’t a common sight in American buildings today. But chilled beam cooling shares many of radiant heat’s benefits, and it’s worth considering if you’re in the market for a new air conditioning system. Here’s how it works and why we like it.

​You can think of chilled beam systems as, well, radiant cooling. Chilled beam units are installed in ceilings where the cooling process begins with chilled water flowing through a coil in the system. Next, the cooled air mixes with the warm air rising from the ground. Finally, the pressure change caused by this motion creates a cyclical pathway, which pushes the treated air into a space. These units are called “passive chilled beams.”

Active chilled beams supplement this process by pushing conditioned air through a pressurized nozzle that creates an induction effect. Both versions are much quieter alternatives to forced-air, fan-driven AC systems.

​Because chilled beam systems are comparatively new, even seasoned HVAC professionals are less confident about their design, cost, and installation requirements. Here are responses to a few questions on installing and maintaining chilled beam systems.​

1. Do chilled beam systems cost more than similar cooling systems?
A chilled beam system is almost always used in the active configuration, where outside ventilation air is introduced through the beam before entering a space. As a result, the air handlers that are already required for outside air requirements can be up to 75 percent smaller than mixed return air handling units. There are similarly smaller duct runs throughout the building.

2. Do chilled beam systems have condensation problems?
Actually, no. Modern HVAC systems have the ability to control chilled water temperatures and indoor humidity levels to ensure coil surface temperatures are above the space dewpoints. In fact, testing by manufacturers showed that droplets only began to fall more than 20 hours after the coil temperature had reached the dewpoint when systems operate out of setpoint.

3. ​Is it safe to install chilled beam panels near lighting, sprinklers, and sensors?
Yes. In fact, there is less thermal variability for this equipment when installed near a chilled beam system. Some manufacturers have even integrated electric cabling and fire safety equipment into the design of their chilled beam system units.

4. ​I’m interested. Is a chilled beam system a good fit for my building?
Maybe, and maybe not. At Windy City Representatives, we’ve helped design heating and cooling solutions for many buildings. No two designs have been identical—every building has slightly different needs, and every type of HVAC system has its own benefits and drawbacks.

If you’re interested in incorporating a chilled beam system into your building’s cooling system, contact Windy City Representatives today—we’ll work with you to find the right fit for your needs and budget.

At Windy City Representatives, we partner with premier HVAC equipment providers to help you design the best HVAC system for your building or facility’s needs and budget.